Menü
To the Shop 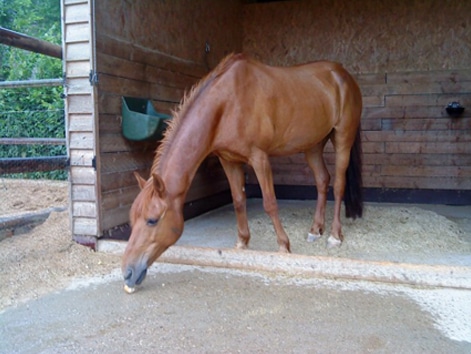 First of all I would like to thank you for the first-class customer service, your support and the delivery of a second device after GLS thoroughly messed up the delivery of the first one. (Not every retailer does this – especially not with products in this price range).

A few weeks ago, my pony was very, very ill. He suffers from COPD and, until a few months ago, we had the problem with bed shavings and steamed teff somewhat under control. However, the coughing got increasingly worse, with cortisone and valvepulmin only helping briefly. An endoscopy revealed that he was drowning in mucous.

However, conventional mucolytics only helped to a limited extent. The next months were always the same: coughing, gasping, extreme abdominal breathing, followed by cortisone and Venti. Two weeks of peace and quiet. Cortisone discontinued slowly. Two days later, renewed coughing, abdominal breathing, downright spastic asthma attacks. I came across your nebuliser on the Internet. It was more or less his last chance– I just couldn’t watch him suffer like that any more.

The fact is: we stopped cortisone two weeks ago. At the same time, I started nebulising NaCl.
First daily, then only every second day from last week Friday onwards (as an initial test!). He has almost normal, relaxed breathing for a COPD horse, no more coughing, he is as happy and alert as before. In addition, he enjoys nebulising immensely, almost falls asleep – and that is a small miracle for him. Because he is actually veeeery head-shy. He accepted the nebuliser from Day 1. And for the past few days he has finally started coughing up whole clumps of mucous – a small miracle!!!!!! My vet is thrilled. Of course I will keep the nebuliser and and would like to thank you for a really great product, also on behalf of my pony.

You are welcome to also publish my email in your progress reports, so that even more horse owners can become aware of this nebuliser, so that many more horses are spared this terrible disease.

The price may be a deterrent for many, but when I consider that last year and this year the veterinary costs added up to almost €5,000.00!!! I could have bought quite a few Flexineb®s.

With kind regards and many, many thanks, Iris Leretz from Kerpen (and Pony Chico).”

WRITE US AN E-MAIL